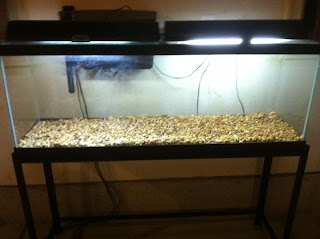 Listed 40 gal. long on craigslist last week $80...not a call! Relisted $65, and this is with stand, filter, heater,lights, and gravel, glass lids. Two dreamers e-mailed...no follow through! Think I'll let it ride for one more week then $50...man!
Went to Auction Village in Warren,Mi...near firehall. Mary has a 8'x4' piece of "bullet proof glass", as she calls it! Says it's worth "thousands", it's 1" acrylic...got her to $100, and she won't budge. This will fit on top of my 388gal., she also has a treasure chest stand, and hood. I will wheel and deal and see if I can cut a deal for both.
Did 50% water changes in both 29gal., gravel vacuum, and filter cleanings. Did Budda tank and Oscar, Red Devil/Jaguar fader tanks too.
Started to medicate Arowana tank because of Clown Knife, with Melafix. Also medicated two 55gal. one has old Flowerhorn, which became sick again (head infection) ,other 55gal. has asorted fry, this infection killed 2 Black Nastys, female Flowerhorn, and a Jack Dempsey...this is the third day of medication.
Posted by Unknown at 3:03 PM No comments: 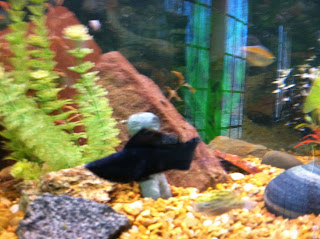 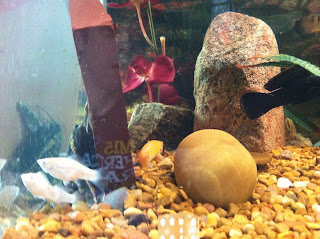 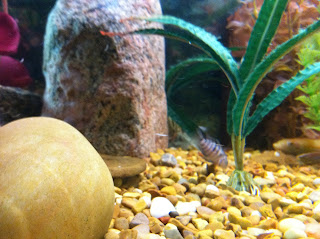 Went to Tom's today, he got my number from Petsmart. He had some Mollys to give to me and a small Convict. They all went into 75gal. tropicals tank...They are doing great, thanks again Tom, come by sometime!
Posted by Unknown at 3:01 PM 1 comment:

This is the Red Terror that Matt gave me about a year ago. He's in a 90 gal. by himself. Great fish, thanks Matt!
This is an Oscar and a Red Devil/Jaguar fader. These fish were given to me by Shane, about a year ago, thanks these are some great fish!
Posted by Unknown at 1:58 PM 1 comment: 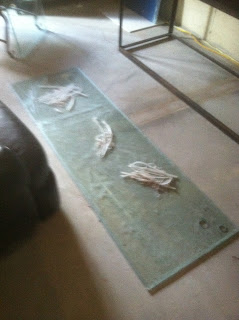 This is what's left of 180gal. sump that I had stored under Red Devil colony tank. 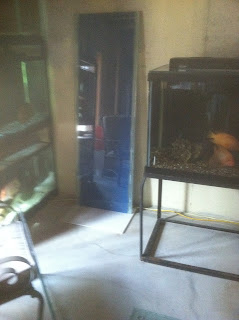 End piece was broke, got it free off craigslist...decided to cut it apart, and stack it against wall. 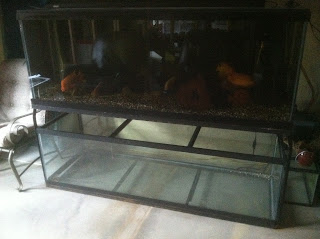 This is the 150gal. I got from Rob. Decided to fill it, and put it to good use! Fits great under 180gal. Red Devil colony tank. 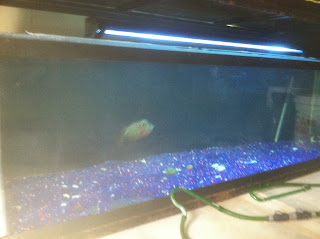 Moved Flowerhorn from 90gal. to the 150gal., to see if I can get some growth out of him. Added 400W Marineland heater and Eheim filter. I used the bottom of 180gal. in first picture as the lid for this 150gal.
Did 50% water change and vacuumed gravel in Red Devil colony tank, also cleaned filter today.
Clown Knife doing ok, so far. Did 25% water change after medication treatment.
Many updates on other blog  http://www.giantfishtanks.blogspot.com/ !!
Posted by Unknown at 5:40 PM No comments:

Clown Knife in Arowana tank showed same symptoms as RTC before he died, did some research on internet. Might be a internal bacterial infection...called bloat. On Tue went and got some Melafix 5ml/ 10gal., going to treat tank for 7 days. This is the third day, had to do something before he died too. So far so good, hard to tell if it's having any effect on him. Melafix is safe for Arowanas. Wish I would have treated RTC, but as this hobby goes...you learn from your mistakes. I will update as the days go on.
Got two 60" Odyssea lights...nice, one on Red Devil colony tank, other on 155gal. bowfront.
400w heater from Marineland arrived yesterday, it replaces the one that burned out...lifetime warranty. That company stands behind their product, with easy exchange. This heater will go into sump for 388gal.
Posted by Unknown at 8:47 PM No comments: 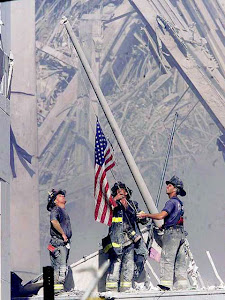 Giant Fish Tanks 210 Gal. and Larger and Unique on Craigslist